When Quaid-e-Tatheer Pir Altaf Hussain Bhai made threatening speeches covered here, quite a lot of people wanted to know if he could be tried under UK law. Someone sent me the following laws under which he could be tried in UK for his hate and murder inciting speeches.

Section 4 Offences Against the Person Act, 1860 – whosoever shall solicit, encourage, persuade, or endeavour to persuade, or shall propose to any person, to murder any other person, whether he be a subject of Her Majesty or not, and whether he be within the Queen’s dominions or not, shall be guilty of a misdemeanor, and being convicted thereof shall be liable imprisonment for life.

So I asked my friend who is a solicitor in UK whether its just a viral email or are there really such laws in UK under which QeT Altaf Bhai can be tried. He had this to say element to them and were directed to political opponents. Section 23 actually relates to possessing racially inflammatory material and is probably not relevant here (unless he possesses records of his speech). The problem is that Altaf did qualify his statements immediately after he made them and said that he was not threatening anyone and so it is necessary to look at the overall speech in context, rather than just selecting a few choice threatening statements. I haven’t heard it because I have a life.

The problem is that Altaf Hussain has been groomed by western governments due to the ridiculous amount of leverage he has over Karachi. Through him the British can shut off our only real port and that is an incredible advantage for one nation to have over another nation. They would be mad to give it up.

So unless Altaf Hussain really fucks something up against British interest, it is safe to assume that he will remain unharmed in UK.

The recent article published in Guardian also makes the same claim that British give Altaf Hussain protection because he is of help to them:

British interest in the MQM is largely driven by the perception that the party offers a defence against jihadis. But there is more to it than that. The MQM is British turf: Karachi is one of the few places left on earth in which the Americans let Britain take the lead. The US consulate in Karachi no longer runs active intelligence gathering operations in the city. The British still do. When it comes to claiming a place at the top table of international security politics – London’s relationship with the MQM is a remaining toehold.

And there’s something else. The FCO’s most important currency is influence. Successive Pakistani governments, when they are not demanding Hussain’s extradition, have included his parliamentary bloc in various coalition governments. From the FCO’s point of view, it’s a great source of access. Right on their doorstep, in London, they have a man with ministers in the Pakistani government.

For its part the UK government insists there is nothing unusual about its contacts with MQM and that its meetings with MQM officials are: “a normal part of diplomatic activity around the world”. I spoke to a British official recently about the MQM and asked why the UK government, so keen to declare its commitment to human rights, seemed so willing to deal with the party despite officials privately saying that it uses violence to achieve its goals. She said: “There is one thing I can assure you of – it’s not a conspiracy.” Which in a sense is true. It’s not a conspiracy. It’s just policy.

Quaid-e-Tatheer Pir Altaf Hussain Bhai has been known to have absurd outbursts all the time that become butt of jokes amongst his opponents (collected here). However, these statements later force his lieutenants to come up with equally, if not more, absurd arguments trying to justify them.

Most recent example is Quaid-e-Tatheer’s statement that “Titanic of Muslim Ummah is sinking.” It left people scratching their heads to understand the explicit or implicit meaning underlying the statement. In comes Mustafa Azizabadi, Member of Central Coordination Committee (Rabita Committee) of MQM and Incharge of MQM International Secretariat London, and tries to give meaning to it in his tweet:

I don’t know what Quaid-e-Tatheer Altaf Hussain Bhai had in mind when it comes to Titanic but personally only thing I am reminded of is that famous (or infamous) scene where Leonardo Di Caprio does a portrait of Kate Winslet.

On a serious note, I think Mustafa Azizabadi is either the speech writer of Altaf Hussain or may be he has invested in Titanic franchise in Pakistan.

But a real leader, to use the trendy self-help jargon, “channels” his vice urge into something positive or let’s say something harmless.

Here is where Quaid-e-Tehreek Pir Altaf Hussain Bhai comes in. Bhai just loves his telephone or rather is addicted to it. That is his only vice if you can call it that.

In these days of Skype where doing a video conference is literally as easy as dialing a number, Bhai likes to remain true to his roots, feet firmly planted in the ground, and give sermons via telephone. He is “The Voice”. He can move crowds into frenzy and into action with just his voice.

Those asking for his return should understand that if he can achieve this via long distance telephone call despite static noise in the line, how much power he can wield with his mere presence amongst his people. Be careful what you wish for.

As alway Quaid-e-Tehreek Pir Altaf Hussain Bhai has been a trailblazer. It is edgy nowadays to take your own picture via a mirror with your cellphone or DSLR. QeT Bhai was decades ahead of this trend by having a professional photographer at the ready whenever he was on the phone. 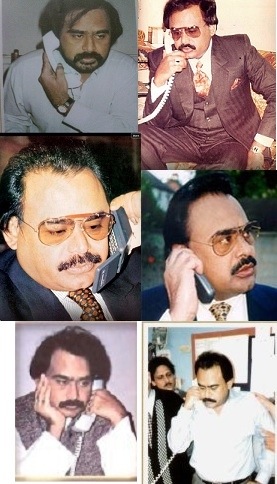 Musharraf’s reentry into politics has received little coverage and even scantier analysis. I have just picked out couple of sound bites which show that the guy has lost it.
According to him, his social system is based on three foundations

1. Quran and Sunnah.
2. realisation of dream of Quaid-i-Azam and
3. Objectives Resolution

Does Musharraf realize who his constituents are or who have been his loyal supporters? To half of his followers who fall on the left side of left-right spectrum commonly described as liberals, intellectuals in Pakispeak, the second foundation is  contradictory to first and third foundation. According to them, Quaid-e-Azam wanted a secular state that has nothing to do with religion of its people. Moreover, these liberals also describe Objective Resolution as betrayal of very principles Quaid described in his 11th August 1948 speech.

Later on in the speech, he offers another pearl of wisdom saying that he wants

“to make Pakistan into a progressive Islamic state”.

Huh? I thought Pakistan was supposed to be a state for Muslims of Subcontinent rather than an Islamic state? Some of you might not find a difference in these two but according to the intellectuals there is a huge  difference between them. Islamic state is contradictory to Quaid’s dream. Quaid-e-Azam wanted a state for Muslims (not an Islamic state) where they could rule themselves under secular laws_I know how ridiculous this sounds but this was the vision of Quaid if one listens to intellectuals.

Anyway, this post is not about Quaid. It is about Musharraf and by making this statement Musharraf is turning away his supporters who lie on the liberal/secular side of the spectrum. The question arises then who is he aiming at? Doe eyed fresh graduates and hardened Musharrafites of urban middle class in whose books and statistics Musharraf could do no wrong.

Personally, I think he has shot himself in the foot with this speech. The majority of the right wing dislikes or hates Musharraf except for the young middle class which made money in Musharraf’s credit fuelled bubble economy. Unfortunately the bubble burst at the same time as Pakistan was transitioning to democracy so the politicians ended up taking all the blame for the economic slide (not that Zardari & Co. have done anything to stop the downward slide ).

The purpose of all this is that Musharraf has started on the wrong foot and he has not judged his supporters correctly. He might be able to take a few votes away from MQM but that is the only major loss I expect and thats why Altaf bhai is in panic mode (thinking of shifting to Dubai, thinking that his days in this world are numbered etc).

Unless, the west or Army brokers a combining of all Muslim Leagues under Musharraf (similar to ISI engineered IJI) I would be surprised if Musharraf even gets a single seat in the coming elections.

Books I have read

You can reach the author at 2paisayATgmailDOTcom